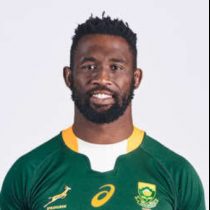 Siyamthanda Kolisi came from humble beginnings with his inspirational journey taking him to the pinnacle of test rugby as he captained South Africa to World Cup glory in 2019.

Growing up in the township of Zwide, Kolisi's mother, Phakama, was 17 when Siya was born and his father, Fezakele, was in his final year of school. Kolisi's mother died when he was 15, leaving his late grandmother, Nolulamile, to raise him.

When he was young, Siya Kolisi’s favourite toy was a brick. His friends had toy cars but he would have as much fun, if not more, pushing his brick around in the Zwide township of Port Elizabeth (PE). These days he travels the world pushing in scrums but he never envisioned earning his living playing sport. Kolisi grew up in the impoverished Zwide township outside Port Elizabeth and endured a tough upbringing. At the age of 12, he impressed scouts at a youth tournament in Mossel Bay and was offered a scholarship at Grey Junior in Port Elizabeth. He was subsequently offered a rugby scholarship to the prestigious Grey High School.

He was also a part of the Eastern Province Kings youth set-up between 2007 and 2009, playing in the Under-16 Grant Khomo week and the Under-18 Craven Week before shifting west to join Western Province. He also represented South Africa at Schoolboy level.

The star from Grey High School quickly rose to prominence through the Western Province ranks. A revelation at openside flank after Schalk Burger was cancelled out due to injury, Kolisi won many hearts over with his courageous play in the tight-loose.

Kolisi was a member of the South African under 20 side that competed in both the 2010 and 2011 Junior World Championships.


It did not take Kolisi long to make an impression in the senior team and he made his Western Province debut in 2011, before going on to earn his first Stormers cap in 2012. Kolisi made a try-scoring debut for the Stormers in the opening game of the 2012 campaign, coming on as an injury replacement for Schalk Burger.


Kolisi became Springbok #851 on his 22nd birthday in 2013 debuting against Scotland having impressed in his first two seasons as a Stormers player. In 2015, he was in the Springboks extended 2015 training squad and was selected in the 31-man RWC Squad.

Having earned 76 caps for the Stormers since making his debut in 2012, Kolisi was appointed as captain of the Stormers in 2017, with lock Eben Etzebeth his vice-captain. The Stormers captain made 13 appearances for the Cape-based side in 2017 and earned his 100th Super Rugby cap against the Bulls at Newlands during the 2018 Super Rugby season.

In May 2018, Kolisi was named as the Springbok captain for the three-match test series against England by Rassie Erasmus. In 2019, he became the third Springbok captain to lift the Webb Ellis Cup, when the South Africa beat England 32-12 in the Rugby World Cup Final in Yokohama. Siya Kolisi is the first black captain of a World Cup-winning side.

In December 2019, he was one of 8 Springboks to re-sign for the Stormers for the 2020 Super Rugby season and beyond. After the Rugby World Cup in Japan, Kolisi became the first rugby player to sign with Jay-Z's sports agency ROC Nation. In 2020 he set up the Kolisi Foundation and, along with many of his Stormers teammates, played a major role in providing relief for vulnerable communities during the COVID-19 pandemic and resulting lockdown.

Kolisi's current contract with the Stormers and Western Province was set to come to an end in October 2021, however, he chose not to take it up an extension and was released early from his contract, upon acceptance of a transfer fee.

In February 2021, he signed a multi-year deal with the Sharks. At the time of his signing, Kolisi has 50 test caps to his name scoring six tries for his country, starting 36 of those caps and captaining his country 20 times in that time.