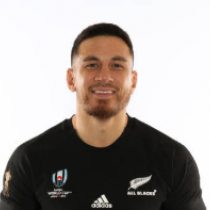 Probably one of the most marketable rugby players on the planet, Sonny Bill Williams is not only a successful Rugby League convert but also a successful professional boxer.

Having made his high profile move to Union a number of years back he slotted into the All Black squad with ease, winning the World Cup on home soil with his side. Controversially, he made his way back to League after that and just recently resigned with the Chiefs for the 2015 season.

He has added the Ranfurley Shield, ITM Cup, Super Rugby & Bledisloe Cup medals to his RWC Winners medal collection. He first signed with New Zealand Rugby in 2010, earned his first All Blacks cap that year and now has 33 Tests under his belt, along with two Rugby World Cup winners medals in 2011 and 2015.

He made his debut in 7's in 2016, helping New Zealand to victory in Wellington and Sydney. Few players boast the physical gifts of Williams, who cuts an imposing figure on the field.

In June 2016, it was announced that Williams has committed his future with New Zealand by signing a three-year contract and deciding to play for the Auckland-based Blues.

The experienced centre helped the Blues claim a victory over the Britsh and Irish Lions in July 2017 and went onto start the first two test for the All Blacks against the Lions.

He entered the 2018 rugby season with 49 Super Rugby caps and has scored 11 tries in the competition. He has also represented the All Blacks 43 times since debuting against England in 2010 scoring 11 test tries.

Sonny Bill Williams finished off his union career helping the All Blacks to third place in the Rugby World Cup in Japan in 2019.

He went on to play rugby league for the Toronto Wolfpack and had another short stint with the Sydney Roosters before confirming his retirement from both rugby codes to focus on his boxing career in March 2021.