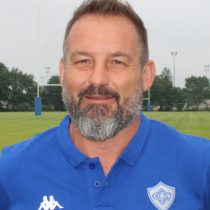 A former flyhalf at multiple PROD2 and TOP14 clubs across France, Stephane Prosper moved into coaching after his playing career.

His coaching career started at Mont-de-Marsan where he coached between 2004-2013 before moving to Agen in 2013.

His work with Agen caught the interest of Castres and he joined the club in 2019.