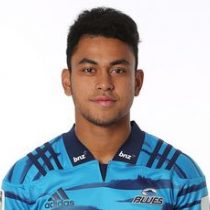 Perofeta played for Wanganui while at Wanganui Collegiate in 2015 before he gained selection in the New Zealand Heartland XV.

He, along with New Plymouth Old Boys lock Fin Hoeata, were among 49 players assembled in Palmerston North in March 2016 for a New Zealand under-20 trial camp.

Making his name with provincial rugby with Taranaki, Perofeta made his first appearance for the Blues in Round 15 Super Rugby against the Reds in Apia.

The hugely promising fly-half scored on debut and will make his first start for the Blues against the British & Irish Lions in Eden Park on 7th June 2017.

Having enjoyed a brilliant Mitre 10 Cup season for Taranaki in 2017 the quietly spoken, speedy first five went into the 2018 Super Rugby season looking to add to his 2 appearances in the competition and had more responsibility following the departure of Piers Francis, Ihaia West and the long-term injury to Otere Black.

His return to rugby for Taranaki in the Mitre 10 Cup will have pleased Blues fans, who will expect more of the same scintillating form from Stephen.

After long-term injury, Perofeta signed a new deal with the Blues until 2021. Ahead of the 2020 Super Rugby season, he has obtained 15 caps and is looking to extend this.

He heads into the 2020 Mitre 10 Cup season with 32 appearances for Taranaki.