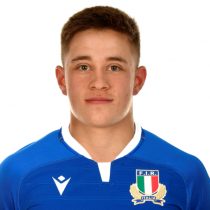 A nippy halfback, Varney impressed early on in his career in the West Country having come through the Gloucester Academy.

Altough being born in Wales, Varney qualifies for Italy through his mother Valeria. His mother was born in west Wales, but both of her parents were born in Italy, hence his eligibility.

The scrumhalf gave up on rugby after missing out on the Scarlets' pathway system after featuring for the west u16s turning his attention to golf. However, he returned to the game when he went to Hartpury College to start his studies. His form there saw him being offered a place with the Gloucester RFC Academy and has his career has taken off since.

He represented Italy at the u18 Six Nations where he came off the bench against Wales to score two tries in 34-13 victory. As a teenager was also named man of the match in Italy's Under-20 win against Wales in Colwyn Bay in January 2020.

At the age of 19 he quickly rose through the ranks at Gloucester to become a key member for the side, particularly since the resumption of the season following the impact of COVID-19. He scored a try off the bench in Gloucester's first game back against Worcester before doing the same to Bristol and earning a start against Saracens where he scored his third in as many games.

His form did not go unnoticed by the national selectors as he was called into the Italy squad for the resumption of the 2020 Six Nations season.