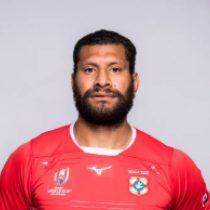 The Australian born second row forward, who represented Australia Schools in 2007, made 60 appearances for Leicester Tigers during a four-year spell in the Premiership.

He achieved his major breakthrough with the Leicester Tigers in 2011/12. The big man scored tries in the finals of the LV= Cup and English Premiership, but was surprisingly omitted from the Tongan 2011 World Cup squad.

Following his time at Leicester, Mafi returned to Australia to take up a contract with the Western Force in Super Rugby.

Mafi comes from solid rugby stocks, as his grandfather Sione Mafi Pahulu captained Tonga. Despite playing age-group rugby for Australia, Mafi decided to follow his roots and play for Tonga on the Test stage. He has Super rugby experience with the Force and was drafted back into the Tongan squad in 2015 and to represent the country of his heritage in the 2015 RWC.

He returned to Australia after his time at the Leicester Tigers and began an impressive season with Western Force in the Super Rugby league.

He has gone on to make over 40 appearances and was part of the Castres side that defeated Montpellier in the Top 14 final in 2018, crossing for a try.

Ahead of the Pacific Nations Cup, the versatile forward, who also operates in the back row, has 29 caps to his name for Tonga, including three appearances in the 2015 Rugby World Cup.

In July 2019, he signed a deal with London Irish ahead of the 2019/20 season and will link up with the squad following the World Cup.