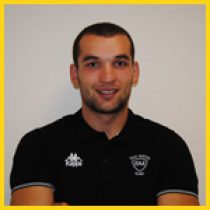 Tamaz Mchedlidze is a Georgian national and began his career with the Universiteti team and moved to the top flight rugby in Georgia soon after representing Armia Tbilisi. His move to French rugby started in the top 14 side Stade Montois in 2012. The utility back line player who is comfortable at wing or full back but prefers the centre position moved to Pro D2 side Agen in the summer of 2014. His international career with Georgia started in 2013 and still continues.