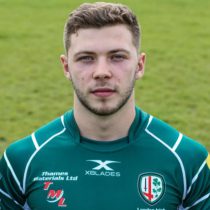 Theo made his senior debut for London Irish against the Scarlets in the LV=Cup and in doing so, became the Club’s youngest ever try scorer.

The fly half, who joins the senior Academy from Abingdon School, has represented and captained England U18s.

In May 2016, Theo was named in the England squad for the World Rugby Under-20 Championship taking place in Manchester, as well as getting a spot in the England U20 squad that would compete in the 2017 U20 Six Nations.

Academy graduate Theo Brophy Clews made his senior debut during the 2015/16 season having joined the club from Abingdon School.

Highly regarded as one of the brightest talents in the country, Brophy Clews was part of the England U20 squad at the 2017 Junior World Championship in Georgia.

After 35 appearances for London Irish, Brophy-Clews re-signed for the 2018 season with the club.

In May 2021, he announced his retirement from professional rugby on medical grounds after suffering a career-ending concussion.