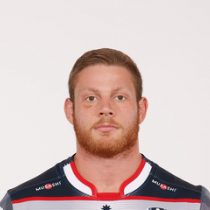 Having played most of his professional rugby in NSW, Metcher made the move to Melbourne in 2015 where he earned his Super Rugby debut in that season against the Waratahs.

To date, the prop has made 6 Super Rugby appearances and is yet to score a point.

Metcher has since moved to Seattle, where he will represent the Seawolves in the first Major League season and joined the Counties Manukau Steelers for the 2019 Mitre 10 Cup