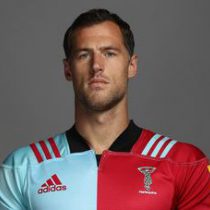 Renowned as one of Europe’s finest wingers, Dutch born Visser qualifies for Scotland through residency. Initially spotted at the Amsterdam 7’s, Visser was offered the chance to study in England at Barnard Castle School in Northumberland.

Visser’s form for the school team saw him selected for the English School’s team and sign for the Newcastle Falcons. Visser spent three years at the Falcons, including loan deals at both Darlington Mowden Park and the then Championship side Northampton Saints. When he finally made his Newcastle debut, in 2006, he scored the winning try in the final play of the game. He then joined Edinburgh at the beginning of the 2009/2010 season, and made an instant impression, scoring four tries in his first six appearances.

The 28-year-old continued his impressive form into his second and third season, named the League highest scorer in both campaigns. His try scoring exploits also extended to the Heineken Cup, where he scored four tries in Edinburgh’s 2012 march to the Semi Finals. It soon emerged that, through residency, that Visser would become eligible for Scotland in the summer of 2012.

His Scottish debut came in 2012 in a game against Fiji, a game in which he scored a brace of tries. Visser’s first appearance for Scotland on Scottish soil came against New Zealand in November 2012, the winger, once again, scored a brace of tries in the game, becoming the first Scottish player to score against New Zealand for seven years. Visser’s fine form for club and country has seen him the winger linked with a call up the 2013 Lions squad.

Two tries in the defeat of Italy in August 2015 helped Visser clinch a place in the 31-man squad named for the 2015 Rugby World Cup.

The left winger has won 28 caps to date; Visser was named in the Autumn International squad and recently played in the narrow loss to defeat and the win against Argentina at Murrayfield.

In January 2017, he was included in Scotland's squad to compete in the 2017 Six Nations tournament. Visser has scored 3 tries in 11 games in Six Nations.

In May 2017, Visser was named in the Scotland squad for the three-Test summer tour. Having won 31 caps to date.