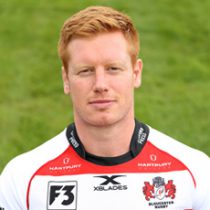 Denton began his career with Yorkshire Carnegie under the stewardship of former England coach Stuart Lancaster, and made 60 appearances for the Headingley outfit between 2006 and 2012.

From there he moved to Leinster and featured 40 times in four seasons in Dublin during one of the most successful times in the club’s history where they dominated both European and Domestic titles.

The 6ft 6” lock then returned to England in 2016 as he signed for Gloucester, and has played seven times for the Cherry and Whites whilst regularly being a strong part of their A League squad.

In April 2018, Ealing Trailfinders confirmed the signing of Denton from Gloucester Rugby on a two-year contract.

The second-rower added a huge amount of experience to the squad and as a set-piece expert he strengthened both the scrum and lineout for the 2018/19 campaign.

In July 2019, Denton was forced to retire from rugby due to injury.