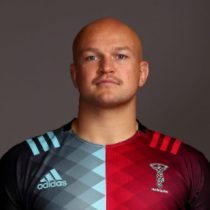 The powerful No. 8 has had a season to remember in 2016/17, capping off his final year at the University of Exeter as the top try-scorer of BUCS Super Rugby and securing a senior academy contract with Exeter Chiefs.

Lawday played in nine BUCS Super Rugby games, where he picked up 10 tries – and then went on to pick up another three tries in the Championship semi-final win against Loughborough. Add to that six Man of the Match wins – and it’s easy to see why he was voted the BUCS Player of the Year.

In November 2016, Lawday played his first senior game for Exeter Chiefs in the Anglo-Welsh Cup against Harlequins at the Stoop and a week later, the talented back rower then scored his first try for the Chiefs against Cardiff Blues at Sandy Park.

Lawday featured heavily for the Cornish Pirates in the Championship, where he was named among the division's top players for his impressive on-field displays.

In March 2021, Lawday signed a long-term contract extension with the Harlequins.