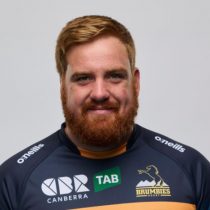 Growing up in the nation's capital, Tom Ross has risen through the rugby pathways in the ACT, now part of the Brumbies and Canberra Vikings squads.

A captain of the u17s in in 2015, the powerful tighthead led the side to victory in the 2015 Gold Cup final. After a successful U20 World Championship in 2018 the Brumbies Academy player was drafted into the Brumbies wider training squad ahead of the 2019 Super Rugby season and in June that year signed a senior contract with them.

Ross earned his Super Rugby debut in the Brumbies 2019 win over the Waratahs at GIO Stadium during the 2019 Super rugby season.

With his natural flair for the darker arts, the set-piece, Ross looked comfortable at the Super Rugby level and heads into the 2020 Super Rugby season with three caps to his name.