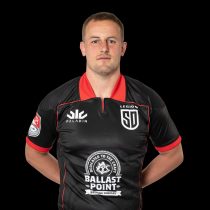 Travis is the younger brother of Josh who is a test international for Canada.

While Larsen was born in Parksville, Canada, the young flanker spent his formative childhood years in Paihia, New Zealand growing up and learning the sport of rugby.

After graduating from Kerikeri High School, Larsen headed to Massey University, where he received a Bachelors degree in business with a double major in Management and Property Studies.

From 2014 to 2016, the forward played professionally with Rugby Lyons Piacenza and Petrarca Rugby in the Italy Top12 league. While with Rugby Lyons, Larsen was honored with the Man-of-the-Match selection for the final Serie A victory.

Larsen was acquired by Major League Rugby side Seattle Seawwolves from the San Diego Legion late in the 2021 season and he would impress enough in his three starts to earn a new deal in August 2021.