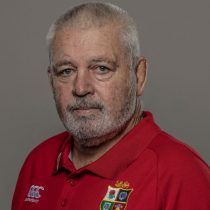 Born in Hamilton, New Zealand and educated at Hamilton Boys' High School and Waikato University, Gatland was in charge of the Lions when they secured their first series triumph since 1997.

In 1996, he became coach to Connacht and led them into the quarter-finals of the European Challenge Cup in 1998 before succeeding Brian Ashton as Ireland coach in 1998 and leading the side to a close 18–16 defeat in Paris.

Years 2000 and 2001 saw him move Ireland up two places to sixth in the IRB World Rankings before being replaced by his assistant coach Eddie O'Sullivan.

After losing the Irish job, he joined the coaching staff at Wasps, who were bottom of the Premiership table at the time and he helped steer them clear of the relegation zone before taking over as director of rugby.

Gatland went on to further ventures, leading Wales to fourth in the 2011 Rugby World Cup, winning a Grand Slam in the 2012 Six Nations Championship and Head Coaching the Lions for the 2013 tour of Australia before being announced as Head Coach for the 2017 Lions Team.

As of June 2019, Gatland is currently the longest-serving international rugby coach in the world, and since his appointment in 2008 Wales have won three Grand Slams and a further Six Nations title, as well as twice reaching the knock-out stages of the Rugby World Cup.

Following Wales' 2019 Grand Slam victory Wales maintained a record-breaking 14-match winning run, and having also coached Ireland from 1998 to 2001, Gatland is unparalleled in terms of experience at international level with 158 Tests to his name so far.

In October 2019, Gatlad led Wales to a semi-final of the 2019 Rugby World Cup before the side recorded a defeat to South Africa. He would depart Wales following 12 years in charge.

– He also holds the record for the most Test matches overseen (As of June 19).
– Gatland is the only coach to have won three Grand Slam titles.
– He has led two British & Irish Lions tours as head coach, and was unbeaten in Test series’ against Australia (2-1) and New Zealand (1-1-1).
– Gatland’s Wales side had a record-breaking 14-match unbeaten run, the longest of any Wales team in history.

Following the 2019 World Cup, Gatland returned to New Zealand where he took charge of the Chiefs for one season before taking the reins of the British & Irish Lions' tour to South Africa. The Lions were defeated 2-1 by the Springboks in a Covid-19-ravaged series which saw the sides face each other in empty stadiums. Thereafter Gatland took up the Director of Rugby role with the Chiefs.

In December 2022, it was announced that Gatland would once again take charge of Wales after Wayne Pivac was sacked from the job after a poor run of results since the latter took over in 2020.