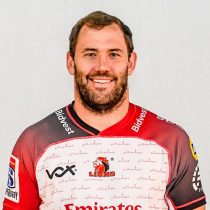 Born in Paarl, van der Sluys attended the local High School before moving onto the University of Stellenbosch, where he played for Maties Rugby Club.

Wilhelm was part of the Western Province team that won the Under 19 Currie Cup 2010 Championship.

Wilhelm was part of the Western Province, he made his debut during the 2012 Vodacom Cup, coming on as a replacement in their game against Pampas XV, before going on to win the Currie Cup in the same year, featuring in the same side as current Chiefs star Don Armand.

He was subsequently named captain of their Under 21s before earning selection for the seniors and also featured against Pumas in the 2015 Vodacom Cup final.

After 25 appearances for the Western Province, Wilhelm signed for the Worcester Warriors on a trial period.

He made his debut for Warriors against the Wasps in 2016 and spent time on loan at London Scottish and Rotherham Titans.

In March 2017 he signed a loan deal that saw him move back to his home country to play Super Rugby for the Southern Kings.

In July 2017, the forward signed for Exeter Chiefs on a one-year deal from Super Rugby side, the Southern Kings, and became Rob Baxter's sixth new addition of the summer.

After 12 appearances for the Sandy Park-based side, van der Sluys left the club to link up with the Lions.