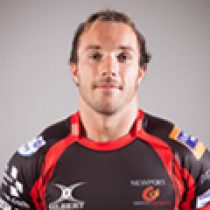 Will made his Dragons debut in October 2009 against Glasgow Warriors in the Heineken Cup, but really demonstrated his potential in his LV= Cup performances against the Ospreys and in particular against Sarcens where he scored two outstanding tries against a side that were sitting second in the Guinness Premiership at the time.

Will is a dynamic runner with great pace and agility and following the victory against Saracens, left for Las Vegas to join the Welsh Sevens team where Wales finished second in their pool.

He made his debut for the Wales rugby union team against New Zealand in June 2010. P

icking up a cruciate ligament injury late in the 2010/11 season, Will returned to action after an 8 month lay off in December 2012's Amlin Challenge Cup games against Exeter Chiefs.

Will then had a strong end to the season with the Dragons, alternating between selection on the wing and at full back, which culminated in his selection for the Wales squad to prepare for their tour to Australia.

In 2014, he signed for Ealing Trailfinders in the Championship.

Will Harries signed on for Ealing Trailfinders for the 2017-18 Greene King IPA Championship season.

The fullback or wing is one of Ealing Trailfinders' highest-profile players having been capped three times for Wales and been a regular for their sevens team, including at the Glasgow 2014, Commonwealth Games.

Last season, the 30-year-old has scored seven tries in 20 appearances, including a sensational individual effort against Yorkshire Carnegie in the play-off semifinals, and will certainly look to carry this form into the new season.