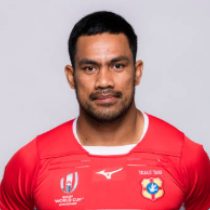 Pakalani grew up in Ha'ateiho in Tonga. His usual position is left wing but he is also capable of playing full-back as he has done previously.

Nicknamed the 'Tongan Hit-man', he went to secondary school in Tamaki College in New Zealand.

A former captain of Tonga Under-20s and a member of Australia’s Sevens programme during 2014, Pakalani won his first Test caps with Tonga against Pacific rivals Fiji and Samoa in the summer of 2017.

He joined ITM team Auckland on a 2 year contract in 2009 before moving to the New South Wales Waratahs in 2011 until 2013. He captained the Tongan u20's in the 2009 Junior World Championship and he now plays for both the Tongan Senior team.

He played 7's for Australia in 2014 and 2015 and now hes playing at club level for the Western Sydney Rams.

In September 2017, Leicester Tigers confirmed the signing of Pakalani for the 2017-18 season.

The 25-year-old Pakalani can play at full-back and wing, and arrives in Leicester after previous experience with Auckland in New Zealand and in Super Rugby with the Waratahs, making his debut there as a teenager in 2011.