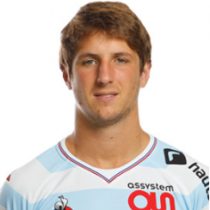 Born in Bayonne, Chouzenoux grew up in the Basque Country. A product of the Bayonne Espoir system, he made his breakthrough for the senior side during the 2014-15 Top 14 season.

During the 2016-17 campaign, he played 22 games including 18 as a starter. Following Bayonne's demotion to the second-tier of French rugby, Chouzenoux made the switch from the Basque coast to Paris where he joined Racing 92 for the 2017-18 season.

Racing 92 was the perfect fit for the youngster to further advance his career as he learnt alongside established international back-rowers such as Bernard Le Roux, Yannick Nyanga and Antonie Claassen.