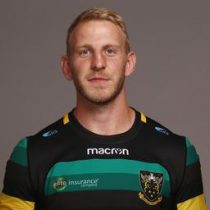 Born in Luton, England. Nutley is a flanker very much in the mould of former England skipper and British and Irish Lion Lewis Moody. A dynamic back-row forward with an appetite for the physical aspects of the game, Nutley has represented England at both Under 19 and Under 20 level.

His Premiership debut came at the start of the 2011/12 campaign, a season in which he became a regular in the side, making four appearances in the Heineken Cup.

During the 2012/13 season, Ben played 10 matches for the first team, competing with the likes of Phil Dowson and Tom Wood, and captained the Wanderers to a second successive Aviva ‘A’ League semi final.

Internationally, Ben represented England Under-19s in 2010/11, scoring a try on his debut against Ireland in a 31-13 victory in Dublin. Further international honours came in 2012 when Ben played for the Under-20s in the Six Nations before taking part in the IRB Junior World Championship later that year.

In 2018, he left Northampton Saints to join Coventry.