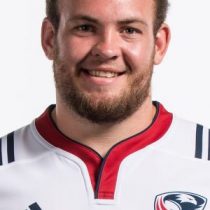 Tarr was selected for the USA Eagles 2014 Autumn tour to Europe after his appearance at the 2014 Junior World Rugby Trophy where he played in the front row.

He made his test match debut on November 8 against Romania when he replaced Olive Kilifi at tight-head prop.

He was included in the USA team that would compete at the 2017 Americas Rugby Championship.

In May 2017, Tarr was named in the USA Men's Eagles will assemble for the Emirates Airline Summer Series and Rugby World Cup 2019 Qualifiers this June and July, having won 5 caps to date.