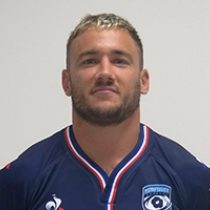 Paillague began his professional career with Stade Français in 2008 playing only 2 games before moving to FC Auch Gers in the second division.

After only six months with Auch he was signed by Montpellier Hérault in January 2009.

In Novemeber 2016, Montpellier extended the contract of Paillague until 2020, after it was originally due to end in 2018.

After spending 9 years with the club, he had played 113 times for MHR over his career as of 2018.

In November 2019, he decided to continue his adventure with Montpellier by signing a new deal until 2022.