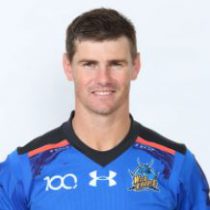 An accomplished goal kicker, Barnes overtook Lote Tuquiri (148) to become the seventh highest points’ scorer in NSW Super Rugby history with 158 points in the 2012 round 17 loss to the Brumbies at ANZ Stadium. A former rugby league star, Barnes has long been a favourite with NSW and Australian rugby fans, his popularity as much down to his down to earth attitude and willingness to sign every last autograph, as his impressive on field skills. A product of Kingaroy in country Queensland and a junior rugby league star, Barnes switched to rugby in 2006, leaving the Brisbane Broncos to join the Queensland Reds. So immediate was his influence, he earned his Test debut the following year at the 2007 Rugby World Cup. After 45 games and four years in Queensland, Barnes joined NSW in 2010 and played his first-ever Super Rugby semi-final that same year after helping his new side to the first of two back-to-back playoff appearances.