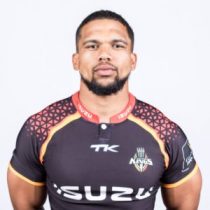 After representing both Boland and Western Province at youth level Klassen went on to represent Maties in the 2011 Varsity Cup.

He went on to represent Western Province in the Vodacom Cup and Currie Cup.

Klaasen took a sabbatical from the professional game at the end of the 2013 after having made Vodacom Cup and Currie Cup appearances for WP, where he focused on playing club rugby.

He returned to rugby in 2017 with the Kings Super Rugby side and made his Super Rugby debut in the opening round against the Jaguares.