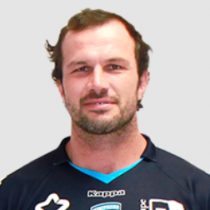 Recognised as one of the most accomplished hookers in the world, Du Plessis has stepped out of John Smit’s shadow in fine style for both the Sharks and the Springboks. His strength and power make him one of the most respected tight forwards in the game, but his impressive ball skills also make him a threat at the breakdown.

After playing under Jake White at Test and Super Rugby level with the Springboks and the Sharks, he opted to join him again at Montpelier from the 2015/16 season. Bismarck was an important player for the Springboks in the build-up to the 2015 World Cup, both in terms of his skill and his leadership abilities.

He earned himself a starting position in the Springbok side in the opening matches of the 2015 Rugby Championship against Australia and New Zealand ahead of rival Adriaan Strauss who has consistently pushed him for the number two jersey. He earned two caps in the tournament and to date he is the most capped player in Sharks Super Rugby with 129 games played and as well as 39 appearances in the Currie Cup.

Following the 2015 Rugby World Cup du Plessis signed a 3-year contract with Montpellier and was selected for their European Challange Cup Final against Harlequins on 13 May 2016.

In April 2018 du Plessis signed a two-year extension with Montpellier which would see him remain at the club until the end of the 2019/20 season.

A month later du Plessis was recalled into the Springbok squad ahead of the June Test series against England having last been involved with the national side during the 2015 Rugby World Cup.

He joined up with the squad following the Top14 Final and looked to add to his 79 Test caps and 11 tries (A record for a Springbok hooker).

In May 2020, du Plessis signed a two year extension at Montpellier having already made 90 appearances for the club.