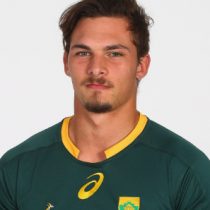 Chamberlain made his Currie Cup debut for the Sharks in August 2019, starting their match in Round Six of the 2019 season against the Golden Lions and kicking a drop-goal shortly before half-time in a 30–28 victory.

The Paarl Boys High prodigy secured his spot in the Sharks Super Rugby squad for the 2020 season.