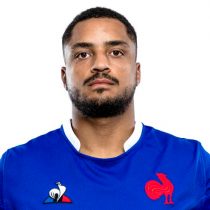 Born in Toulouse, Palu began rugby at the age of 5 in Saint Germain-en-Laye, after spending his early childhood in Africa. Having always been immersed in rugby culture, he follows in the footsteps of his father, rugby player in Toulouse.

Palu starred as an Academy product for Racing 92 signing for the club in 2010. He made his Top 14 debut in May 2016 against Brive which was followed by numerous appearances that season.

His aggressive approach to the game lends well to his strong defence and is particularly skillful with the ball in hand and a real asset at the breakdown. His versatility allows him to play both on the side of the scrum as well as in the engine room.

He helped Racing 92's Academy side win the France Elite 2 in 2017 before he signed his first professional contract in 2017, Palu largely took up the challenge and went on to make more than 25 appearances in the 2017/18 season.

He followed that up in the 2018/19 season by being the most used player in the squad. By 15 January 2020, Palu had made 74 appearances for Racing 92 scoring 4 tries and had won two junior titles with the Paris-based club.

He received a call up to the France 2020 Six Nations squad where he made his test debut.

In November 2020, he signed a new deal with the French club.