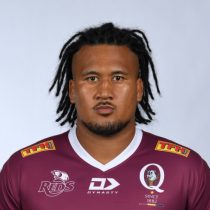 Brandon Paenga-Amosa is a powerhouse hooker of immense potential who stands convinced that his time swinging garbage bins on the streets of inner Sydney gave him the hardened edge that underpinned a stunning 10-month transformation from Sydney club rugby to likely Test debutant.

Born in Auckland, Paenga-Amosa soon moved to Sydney, started playing rugby league at the age of three and from there progressed through the Canterbury Bulldogs’ junior system. It wasn’t until he was 15 that Paenga-Amosa switched to union and, according to the man himself, ‘has never looked back.’

He started playing rugby league until he was 15 and also spent time studying theology, landscaping, labouring and scaffolding as he plied his true trade with club rugby outfit Southern Districts.

He was chosen in the Combined High Schools team alongside future Wallaby Lukhan Salakaia-Loto but then went on to drift in and out of the Waratahs program. Impressive performances for Southern Districts in the Shute Shield competition saw Paenga-Amosa graduate to the National Rugby Championship in 2016 where he racked up six tries in seven appearances for the Western Sydney Rams. A year later he shifted to the NSW Country Eagles and scored five tries in seven games - including a hat-trick against Brisbane City in the last round.


A standout player for Southern Districts side in Sydney's Shute Shield, Paenga-Amosa made his NRC debut for the Greater Sydney Rams in 2016. He made the switch to NSW Country Eagles in 2017.

The Melbourne Rebels offered him a chance in its wider training squad for the 2018 Super Rugby season before a call from Reds’ coach Brad Thorn saw Paenga-Amosa move north to Queensland. His scrummaging and all-round game immediately impressed the Reds’ faithful however it was one excellent performance, against the Lions and their imposing Springbok star Malcolm Marx, which not only caught the attention of national coach Michael Cheika but also earned him a Test debut in the home series against Ireland.

Paenga-Amosa went into the 2018 Rugby Championship with 3 test caps. One of four players to play every match for the Reds during the 2019 Super Rugby season, he finished as Queensland’s second equal-highest try-scorer with five tries, alongside Samu Kerevi and Chris Feauai-Sautia.

After making four appearances for the Wallabies in 2018, Paenga-Amosa missed out in 2019 but his return to stellar form in 2020 earned him a recall to the test squad under Dave Rennie.