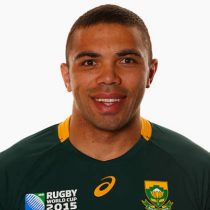 Widely regarded as one of rugby's greatest wingers, Bryan Habana burst onto the domestic scene during the 2004 Currie Cup with the Lions.

He played centre and scrum-half throughout age-group rugby before moving to the wing where he would go on to make a huge impact.

Named after Manchester United Legends Bryan Robson and Gary Bailey, Habana represented the South African u21s at the IRB U21 World Championship in 2004 and was included in the Springbok squad for the 2004 Tri Nations later that year.

He had to wait until November later that year to make his debut when he scored, with his first touch, off the bench against England at Twickenham.

In 2005 he joined the Bulls ahead of the 2005 Super Rugby season and was instant hit as his helped the side to two Super Rugby and Currie Cup titles.

One of Habana's most memorable moments for the Bulls was when he scored a last minute try in the Super Rugby final, enabling flyhalf Derick Hougaard to make an easy conversion and giving the Bulls a dramatic 20–19 victory over the Sharks

Known for his electrifying pace and high work-rate, Habana continued to underline his reputation as one of the most prolific wings in the history of the game.

Notably in 2007 where he equalled the legendary Jonah Lomu's record for the most tries in one World Cup (8), as he helped his country lift their second Rugby World Cup.

His efforts with the national side saw him being named as the IRB World Player of the Year in 2007. In 2009 Habana scored the second highest number of tries as the Bulls retained the Super Rugby title.

That same year the Springboks hosted the British and Irish Lions and the potent winger burst through their defence and scored one of his most memorable tries in the second test as the Springboks went onto secure a 2-0 lead in the series with one test to go.

Later that year Habana played on the left wing for the Barbarians for their 'Final Challenge' against New Zealand. He scored 3 tries as the Barbarians defeated the All Blacks, who had not lost a match in the Northern hemisphere in 2 years.

Habana was selected for the 2011 Rugby World Cup. They were victorious against Fiji and Namibia before beating Samoa just 13-5 in which Habana scored a ninth-minute try. South Africa however were then knocked out of the tournament by Australia in the quarter-finals by 11-9.

In January 2013, Habana confirmed that he would move to French club Toulon at the end of the 2013 Super Rugby season, on a three-year contract. While he was at the club he won the Heineken Cup and Top 14 in 2014 and the European Champions Cup in 2015.

Habana was selected for the 2015 Rugby World Cup, where he equalled Jonah Lomu's record of 15 World Cup tries with a hat-trick against the USA. South Africa lost 20-18 in the semi-finals to eventual champions New Zealand and subsequently finished third.

He was made vice-captain of South Africa in 2016, and brought his career try tally to 67.

Habana picked up a serious injury in April 2017 during Toulon's match with Castres. The winger struggled to recover from the injury and a year later he had still not made a return and subsquently called time on illustrous career.

Habana retires having amassed 124 test caps for the Springboks (122 of them in the starting XV), scoring 67 tries (2nd highest total in history, highest total for a Tier 1 nation).

He also retires as with the tied-record number of tries scored in Rugby World Cups (15).

He also won multiple titles including the Tri Nations, Currie Cup, Super Rugby, Champions Cup, Top 14 and a Rugby World Cup. He was also part of the side that beat the British and Irish Lions in 2009.