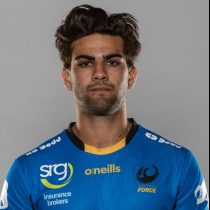 A former Queensland Schools and then Queensland 7s player, Ralston finally progressed into the Queensland Reds academy in 2018.

A key member of the Brisbane City URC side in 2019, Ralston was named in the Western Force squad for the 2019 NRC.

The former Australia U20 International has made 14 Super Rugby appearances for the Force scoring 5 tries (as of March 20222).

Prior to the Force’s move to Super Rugby he was also in brilliant form for the club in the National Rugby Championship, scoring 7 tries in 8 games as he helped them to win the 2019 Grand Final.

Ralston has played most of his rugby on the wing and at outside centre.

He was born in Darwin and then moved to Brisbane where he played High School and Club rugby, before coming through the ranks at the Force.