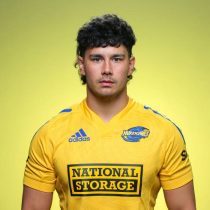 The multi-talented Caleb received the Jack Jeffs Rugby Scholarship and went to Wellington's Victoria University to begin studying for a Bachelor of Architecture degree.

The lock-loose forward was a key part of the Waimea Combined side that recorded a shock 38-24 win over Nelson College in 2017, eventually finishing in their highest ever position in seventh place.

He also received the team's MVP, most valuable forward and People's Choice awards.