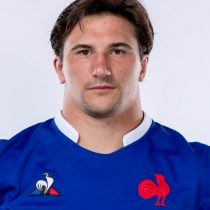 A physically robust and aggressive front-rower, Chat is particularly mobile for his side.

A talented athlete, he was kick-boxing in his youth and was crowned Champion of France at 11 years old.

In 2015, he represented France at the U20 World Cup and won the junior French title with Ciel et Blanc that same year.

He quickly progressed and improved at the start of his professional career debuting in the TOP 14 during the 2015-2016 season, taking advantage of the absence of Dimitri Szarzewski who featured for France during the World Cup.

His performances for Racing 92 did not go unnoticed as he debuted for France during the 2016 Six Nations after just six months as a professional.

The former France under 20 then helped Racing reach the 2017/18 Champions Cup Final. A regular in the Racing 92 and France squad, Chat featured in the Rugby World Cup in Japan.

He took his test cap tally to 26 with 19 of those caps coming off the bench due to Guilhem Guirado's stronghold on the starting jersey.

He was included in the 2020 France Six Nations' squad having made 9 caps in the competition.