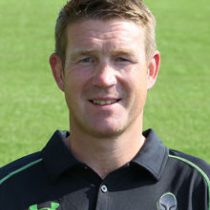 Hogg turned to coaching in 2003 after hanging up his boots at Leeds. He started his coaching career with future England Coach Stuart Lancaster and Tony Stanger at the Leeds Academy before moving to London Welsh and then a coaching role with Edinburgh.

Hogg joined Worcester Warriors as Head Coach in May 2013. The former Melrose, Edinburgh and Scotland back row made the move from Gloucester Rugby, where he had worked for seven seasons.

Hogg, who earned five caps for Scotland during his playing career, took on overall responsibility for the first-team squad in June 2016. In February 2018 Worcester announced that Hogg would be leaving at the end of the season.

He linked up with the Scotland u20s after his time with Worcester Warriors before joining the Ospreys in 2019.