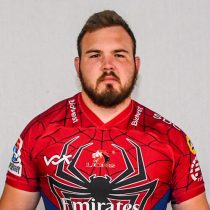 There is a famous old quote from former Springbok Dr Danie Craven, who said the first player on any teamsheet should be your tighthead prop and that any coach's second selection should be his back-up tighthead.

The former Springbok head coached will have certainly pencilled Carlü Johann Sadie down in either of those two spots in his teamsheets with the promising talent delivering performances well beyond his years.

A powerful front-rower, Sadie represented Western Province at Craven Week in 2014 & 2015 and earned a call-up to the SA schools squad following strong performances.

He also represented the Junior Springboks in 2016 & 2017 before making his debut for the Stormers in Super Rugby in 2018.

He would make a further 7 appearances for the Stormers that year, while also featuring for the Currie Cup side.

With a number of tighthead options in the Cape, Sadie joined the Lions on loan where he would get more playing time, in fact, he played all 19 games in 2019 with the Lions.

He returned to the Cape for the Currie Cup before signing as a World Cup medical joker for Stade Francais.

The young tighthead, nicknamed 'Fridge' was reportedly courted by the Lions, who wanted the prop on a permanent deal but the Stormers requested R2 Million.

He was however named in the Lions 2020 Super Rugby squad.