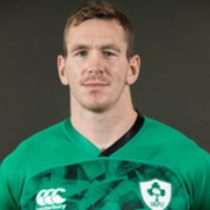 A powerful and hard running centre, Chris Farrell grew up in Fivemiletown, a village in south Tyrone, Northern Ireland. Farrell has become well known as a skilful centre but his initial sporting passion saw him play football as a centre-half for a local team, before turning to rugby at the age of 11 for Clogher Valley RFC in County Tyrone.

Farrell was a member of the Phoenix Ulster Academy and made his Ulster debut against Leinster at the RDS in 2012 at the age of 18. An injury-blighted three seasons in the professional ranks at Ulster, Farrell made just a handful of appearances for the Province but such was the wealth of established talent across their backline, the then 21-year-old made the brave decision to head for France in search of game time.

He joined fellow Irishman Bernard Jackman at Grenoble and made his TOP14 debut against La Rochelle off the bench and made his first start against Oyonnax. The former Ireland U20 centre spent three years in France making 74 appearances, scoring no less than ten tries across the Top 14 and European Challenge Cup.

His form in France prompted an offer from Ireland with Munster signing the centre on a two-year deal ahead of the 2017/18 season. He made a strong start at Munster, forming a destructive midfield partnership with Rory Scannell. His fine form led to a call to the November Tests against South Africa, Fiji and Argentina in 2017.

He made a starting debut in the starting line up against Fiji and made his Six Nations debut in the win over Wales in 2018 Six Nations, winning the man of the match award on his third Test appearance.

In October 2018, Farrell put pen to paper on a three-year deal with Munster that will see him remain with the province until 2022. He was selected in the 31-man Ireland squad for the 2019 Rugby World Cup.

He took his test cap tally to 9 by June 2020 and has 35 appearances for Munster scoring six tries.