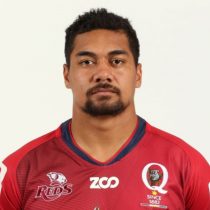 Reds coach Ewen McKenzie signed this powerful winger to a full-time contract while he was still completing his schooling at Brisbane State High School at just 17 years of age.

His debut was initially delayed due to an early-season right hamstring injury, forcing him to miss nine games, while he also missed the Reds run into the finals after re-injuring his other hamstring in his third appearance of the year, against the Highlanders in round 17.

Feuai-Sautia is the most capped Australian Schoolboy in history, tied on 11 caps with Newington College’s Hugh Roach, topping the previous marks of nine Tests held by Wallabies stars Quade Cooper and Kurtley Beale.

A hamstring injury in Brisbane State High School’s final GPS game in July of 2011 robbed Chris of his dream of holding the outright title of Australia’s most-capped Schoolboy as he was forced to sit out both 2011 Tests against England and New Zealand.

The powerful centre took his Super Rugby cap tally to 57 by the end of the 2018 Super Rugby season.

2019 became one of his most consistent seasons after only missing three matches due to a hamstring and also knee injury.

Across his 13 games, Feauai-Sautia scored five tries as the Reds equal-second highest try scorer in 2019.