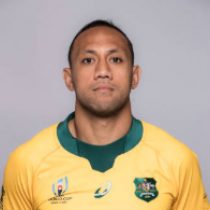 Christian's leadership through the early rounds of 2012 proved invaluable for the most inexperienced Brumbies back line in more than a decade.

Following a season ending injury to Matt Toomua against the Sharks, Lealiifano blossomed in the No 10 jersey creating opportunities for the outside backs.

Making his overall career tallies more remarkable are the serious injuries Lealiifano has successfully battled throughout his career.

Multiple shoulder reconstructions, a broken leg and an ankle reconstruction have all come and gone for Lealiifano, who has remarkably lost little of his acceleration and none of his world class ball playing skills despite the blows.

In August 2016, Lealiifano was diagnosed with leukemia and had a bone marrow operation that will keep him out of rugby for at least 6 months.

In February 2017, Lealiifano recovered from his surgery and is doing rehab ahead of the 2017 Super Rugby.

He was named alongside Sam Carter as Brumbies co-captains and should lead the side after 117 Super Rugby caps and an impressive 796 points scored since his debut in 2008.

Leali'ifano was back on a rugby field for the first time in July when he was named as a replacement in the Brumbies Austbrokers Canberra Cup win in Singapore.

In August 2017, the Brumbies confirmed that Leali'ifano would be joining PRO14 side Ulster on a five-month loan.

The contract ran until 22nd January 2018, following the conclusion of the Champions Cup pool stages.

Leali'fano made 17 appearances for Ulster in the Champions Cup and Pro 14 scoring 47 points.

On returning to the Brumbies Leali'fano was named as the Brumbies co-captain for the 2018 season and added to his 118 Super Rugby caps and 796 points.

In June 2018 Leali'ifano signed for Japanese side Toyota Industries, joining up with the squad following the conclusion of the 2018 Super Rugby season.

He finished the World Cup with 26 test caps scoring 171 points and confirmed his test retirement. He returns to Japan for the 2020 Top League with the Shining Arcs, his fourth Top League side.