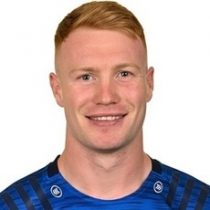 The Skerries native received his first representative honours with Ireland at U18 level during a Three Union Festival.

Ciaran was playing his rugby with UCD in UBL. Accurate off the kicking tee, Frawley is also an option in midfield.

He was a member of the Ireland U20 squad during the 2017 campaign, making 10 appearances in total for the side.

Frawley joined the Leinster Academy for the 2017-18 season, impressing in their British & Irish Cup campaign.

Frawley made his senior Leinster debut against Scarlets in the Pro 14 in February 2018, scoring five points off the tee.

By the end of the 2018/19 season, Frawley had made 14 appearances scoring 82 points for Leinster before he signed his first senior contract with the side ahead of the 2019/20 season.