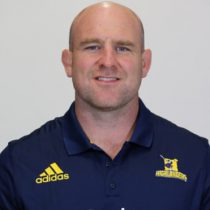 Clarke Dermody had a remarkable playing career which included playing for every New Zealand age-grade team before being named in the All Blacks and playing three Tests in 2006.

The former front rower captained Southland and played 92 games for the Stags and 44 for the Highlanders.

He headed to Europe in 2007 to play for the London Irish Club and played over 100 games for the club before injuring his back in 2012 and retiring to Invercargill.

Clarke enters his sixth season with the Highlanders in 2019 after joining the club in 2014. He is returning from his first season in the coaching team for the Tasman Makos following four seasons with the Southland Stags from 2014-17. Clarke also spent a season in Japan coaching the Sannix Blues in 2014.