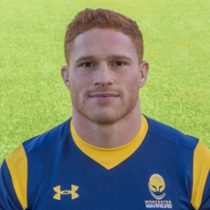 The fly-half or centre has been a consistent performer for club and country over the past number of season's.

Strong in defence and smart with ball in hand, he has represented his country in both Fifteens and Sevens and impressed so much that Scottish side Glasgow Warriors brought him in on a loan deal that was extended until the end of the 2014/15 season.

The versatile back, who can also play in the centre or the back three, went on to sign a one-season season deal with Worcester Warriors in November 2016.