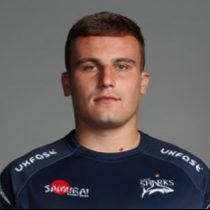 Langdon was born in Weston-super-Mare, where he studied at St Mark’s Primary School and Priory Community School. Curtis is studying at St Paul’s Catholic College.

He progressed through the London Irish academy before agreeing a long-term deal with Sale Sharks in 2016.

His deal at Sharks was soon followed by a recall to the England squad for the 2017 U20 6 Nations championship.