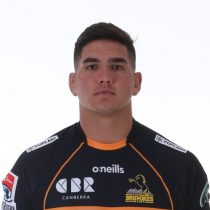 A young lock with the size and skills to be a real force at Super Rugby level and beyond, Darcy Swain joined the Brumbies on an EPS contract after two stand out years in the club’s U20’s program.

Born and raised in Queensland, Swain made the move to Canberra in 2016 after becoming a schoolboy star with Brisbane Boys’ College in the state’s capital city. Having gone through the ranks at the Brumbies and went on to represent the Australian U20s and Canberra Vikings.

The hulking second row made an immediate impression with the Brumbies U20’s, establishing himself as one of the team’s key players and helping them to big victories over the Force and Rebels U20’s during the inaugural Super U20’s competition.

Swain signed a first team contract with the Brumbies at the end of the 2017 Super Rugby season. An excellent athlete, with the ability to take the ball into contact and defend like a backrow, Swain makes his money at set-piece, particularly at the lineout.

His debut against the Jaguares proved to be Swain's only Super Rugby game that year but he become a mainstay in the side the following year featuring in 12 games for the Canberra side. Swain captained the Vikings throughout the early stages of their 2019 NRC campaign before being sidelined by a broken thumb, missing the club's charge to the final against the Western Force in Perth.

The second rower went on to play three of the opening six games of the 2020 Super Rugby season before it was brought to a halt.