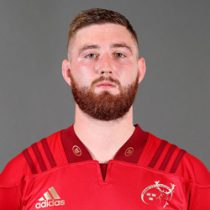 A product of the Munster Academy, O’Shea joined in the academy in 2014 before spending two seasons at Worcester Warriors, helping them win promotion to the Premiership, and rejoining the province in 2016.

O'Shea also spent time at Crosshaven RFC and Dolphin RFC and was part of Ireland's Under 19 and 20 development squads.

He also made his British and Irish Cup debut for Munster A in 2013. O'Shea made 22 appearances in his debut campaign at Worcester including two tries as Warriors secured a league and cup double.

O'Shea left Warriors to return to Munster at the end of the 2015/16 season. By August 2018 the lock had made 24 appearances in red, scoring two tries following his contract extension that saw him remain at the club until 2020.

He scored two tries in 44 Munster appearances and made his debut against Edinburgh in September 2016.

In 2020, O'Shea left Munster at the end of his contract and signed a two-year deal with French ProD2 side Vannes in July.