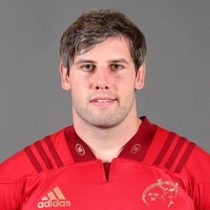 Dave spent three years in the Munster Rugby Academy and was added to the Heineken Cup squad in the 2011/2012 season in his final year.

This was just reward for the impact he had made at British & Irish Cup level and on the number of occasions he featured in RaboDirect PRO12 games.

He moved to a development contract at the start of the 2012/13 season and the Corkman did not have to wait long before making his first Heineken Cup start, excelling in a pool win over Saracens at Thomond Park that December.

He then signed a two-year full contract from season 2013/14.

He represented the Ireland U20s in two Junior World Cup campaigns, in Japan in 2009 and in Argentina in 2010, and in June 2013 represented Emerging Ireland in the Tbilisi Cup.

During the 2013/14 he only featured on five occasions due to injury, and had to undergo surgery after injuring the patellar tendon in his right knee against Zebre in February 2014 and closed out his season rehabbing.

Made a return to PRO12 action against Newport Gwent Dragons at Rodney Parade in November '14, and went on to score his first try for Munster against Leinster on St. Stephen's Day in Thomond Park.

Signed a one-year contract extension that will see him stay with the province until at least June 2016.

Picked up a torn MCL in his left knee while playing for Munster 'A' against the Ulster Ravens in April and will return in time for the 2015/16 season.

In March 2018, Dave signed a one-year contract extension that will see him remain with the province until at least June 2019.

The former Academy Player of the Year has made 82 appearances for the province scoring 20 points.