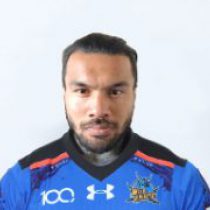 Digby joined the Reds in 2008 from the Western Force, where he had made 20 appearances in Super 14 Rugby after making his debut against the Brumbies in 2006 and scored 20 points from four tries.

His solid form won him selection for the Wallabies in 2007, scoring a try on debut against Wales in Brisbane. His 2008 season was disrupted by a broken hand and two periods of suspension for careless tackles, but his talent still earned him a place in the Wallaby squad and game time with Australia A in the IRB Pacific Nations Cup.

He also won a spot on the end of season 2008 tour to the northern hemisphere. The barnstorming winger has consistently been ranked amongst the leading line-breakers and tackle-busters in the provincial competition and was among the first picked in the Wallabies 2011 World Cup squad.

At the end of 2013, Ioane signed two-season contract to play for Stade Français in the Top 14, and when the contract expired, he moved to Japan to join Honda Heat for the 2015–16 Top League season. Ioane announced signing with the Crusaders for the 2017 Super Rugby season at the end of July.

In August 2017, Ioane signed a new deal with the Crusaders until the end of the 2018 campaign.

Ioane helped the Crusaders win the Super Rugby title in his first season with the side before joining the Panasonic Wild Knights.

The 32-year-old Ioane - who was born in New Zealand before moving to Australia as a child - has played for the Wallabies 35 times.

He has previously played for Australian outfits Western Force and Queensland Reds, as well as Paris-based Top 14 side Stade Francais.

In October 2017, the Crusaders confirmed that Ioane would not be returning to the side for his final year of his contract and will instead remain with the Robbie Deans coached Wild Knights in Japan.