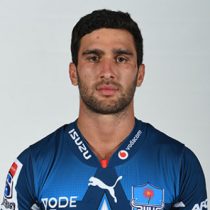 Born and raised in Windhoek, Divan Rossouw represented Namibia as early as primary school level, playing at the South African Under-13 Craven Week tournamen in Kimberley in 2009.

In 2012, he appeared for Namibia at the Under-16 Grant Khomo Week and played all their matches at outside centre and finished the tournament as his side's top scorer.

He again represented Namibia in 2014 in South Africa's premier rugby union competition for high schools, the Under-18 Craven Week tournament held in Middelburg.

Rossouw was included in the Blue Bulls squad for the 2016 Currie Cup qualification series where he made his first class debut in their Round Six match against the Pumas, coming on as a replacement just after the hour mark of a 13–25 defeat.

In November 2016, he was named in the Bulls Super Rugby team's extended training squad during the team's preparations for the 2017 Super Rugby season.

He failed to make his Super Rugby debut in 2017 but featured reguarly during the Currie Cup, he was then named as full member of the Bulls Super Rugby squad for the 2018 season and made his debut in the starting lineup in the opening game of the season against the Hurricanes.

He scored his first try against the Chiefs and scored a second minutes later. In October 2018, Rossouw recommitted himself to the Bulls and Blue Bulls for a further two seasons.

By July 2020, Rossouw had 31 Super Rugby caps scoring four tries for the Bulls before he crossed the Jukskei River to join the Lions.