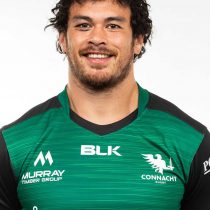 Born in Auckland, Robertson-McCoy attended Sacred Heart College in the city and is Irish qualified through his grandfather, who hails from Mowhan in Co Armagh.

During his time in school, he played for Auckland under-age teams. In 2013, Robertson-McCoy began playing for the Auckland Marist senior side, having played under-age for them already.

In 2014 he was part of Auckland's wider training group for the National Provincial Championship, New Zealand's premier domestic tournament.

Robertson-McCoy can play both sides of the scrum making him an asset. He played three times for Northland in the NPC as they finished bottom of the Championship Division. During his time with Northland, Robertson-McCoy was part of the Blues Development side.

He went into the 2018/19 season having already made 15 appearances for Connacht in the Pro 14.

In February 2020 he signed a new deal with the Irish province following 53 appearances for the side since his debut.