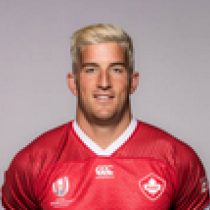 He made the Saskatchewan u18, u21 and Rugby Canada Super League Prairie Fire teams. In 2005 Van der Merwe moved to Victoria, where he played for James Bay AA and won three straight BC Championships in'06-'08 and a National Title in 2007.

Van Der Merwe is now Glasgows leading marksman having overtaken Thom Evans in the try scoring charts. He became the ninth Warrior to be selected for the Rugby World Cup in 2011 when the Canucks included him in their squad for the global gathering in New Zealand.

In 2015 the South-African born Van Der Merwe represented his adopted nation at the 2015 World Cup in England, having been selected in the final 31-man squad. The South Africa-born Canada international joined the Scarlets ahead of 2015/2016.

DTH left the Scarlets at the end of the 2016/2017 campaign and joined Premiership side Newcastle Falcons.

In March 2018, he joined Glasgow for a second time from Newcastle Falcons, where he made just three appearances. The Canada international signed a deal with Warriors until May 2020.

Van der Merwe is Warriors' all-time leading try scorer, touching down 43 times in 96 appearances between 2009 and 2015.