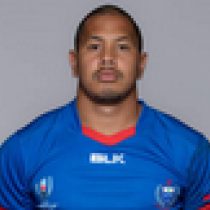 The Samoan international wing has scored eight tries in seven international appearances including a hat-trick in a Rugby World Cup qualifier against Germany in Apia in June 2018 having first made his mark on the international Sevens circuit.

In February 2019, he signed for Worcester Warriors on a two-year contract.