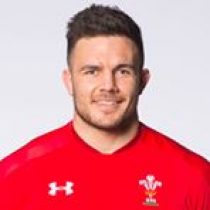 Jenkins played for all the Blues age grades and won the Welsh Championship every year he was in the squad.

His performance at regional level saw him promoted to captain of the Blues U18 squad and then on to Wales. He was integral to the U20 Junior World Cup team in South Africa in 2011/12, who were the first team to beat New Zealand at U20 level, earning them a spot in the Semi-final.

Since returning from the Junior World Cup, Ellis was captain of the Wales U20s team who were runners up to England in the 2013 JWC in France and since then earned himself a full contract and is a key member of the Blues squad.

The Cardiff Blues flanker was a late addition to the Wales side which flew out to New Zealand for a three-Test tour in 2016 after Dan Lydiate was ruled out through injury which he suffered against England.

In May 2017, the three-times capped back row was included in the Wales two-Test summer tour squad.

After 83 appearances for Cardiff Blues since making his debut in 2011, Jenkins handed the club a boost after signing a new contract to remain with the region.

In January Jenkins was named in Wales 6 Nations squad, entering the competition looking to add to his 5 Test caps.

He made one appearance during the 2018 6 Nations and was included in Wales June Test squad.

The 2018/19 season will see him add to his 97 appearances for Cardiff Blues and 55 points scored.

Jenkins heads into the 2018 November International with 8 test caps.